Seventeen lawmakers of the Edo State House of Assembly, including 14 members whose seats have been previously declared vacant, claim that they have impeached the Speaker of the House, Francis Okiye, and his deputy, Roland Asoro.

The decision was taken on Thursday at a private location in Benin City, the state capital, hours after security officials took over the State Assembly Complex.

At the meeting, the 14 lawmakers-elect were, first, sworn in and then, together with three other lawmakers who recently pledged their allegiance to Osagie Ize-Iyamu of the All Progressives Congress (APC) claimed to have impeached the Speaker and his deputy.

The Edo State House of Assembly has been embroiled in a crisis since 2019, one that has now been worsened by the buildup to the governorship elections in the state.

Twenty-four lawmakers were elected from the 24 constituencies during the 2019 general elections.

However, only 10 of them were inaugurated on July 17 of the same year, sparking a controversy that included intervention from the National Assembly.

Five of the 10 lawmakers that were inaugurated including the then Deputy Speaker, Yekini Idiaye, had declared support for Ize-Iyamu last week, after accusing Governor Godwin Obaseki of rendering the legislature in the state useless.

In retaliation, four of the five inaugurated lawmakers met on Wednesday and impeached Idiaye, replacing him with Asoro. 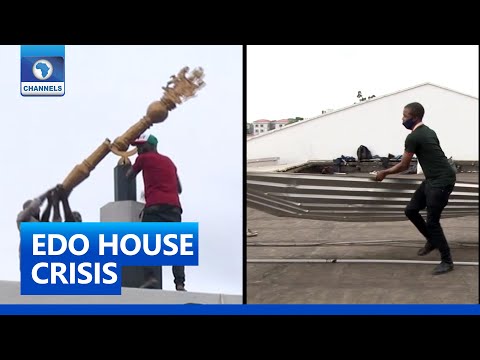 But the lawmakers loyal to Ize-Iyamu claimed to have impeached him and the Speaker, Okiye.

Although a total of 19 lawmakers have pledged their loyalty to the APC, only 17 were present at the meeting and signed the impeachment notice.

The lawmakers, before the end of the plenary, also issued a notice to the Inspector General of Police and the Commissioner of Police in Edo that they would be taking over the Assembly on Friday having taken over its leadership.

%d bloggers like this:
We use cookies to ensure that we give you the best experience on our website. If you continue to use this site we will assume that you are happy with it.Ok