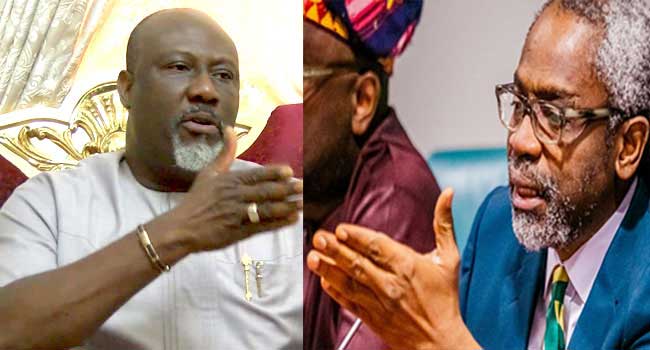 The hearing of a suit filed by a former Senator representing Kogi West at the National Assembly, Dino Melaye, over the Infectious Diseases Bill has suffered a setback.

This was after a Federal High Court in Abuja on Wednesday rejected Melaye’s request to restrain the House of Representatives from continuing the consideration of the bill.

Justice Ijeoma Ojukwu, in her ruling, refused to grant the order because the Speaker of the House of Representatives, Femi Gbajabiamila who is the third defendant in the suit, had yet to be served with the court documents.

She adjourned the suit till June 1 for further hearing.

Dino, who instituted the suit on May 5, 2020, asked the court to declare that some sections of the Control of Infectious Diseases Bill 2020, currently being debated on the floor of the House of Representatives are draconian, oppressive and authoritarian.

The former lawmaker also wants the court to rule that the Bill is in breach of his fundamental rights as provided for in the constitution of the Federal Republic of Nigeria 1999 (as amended).

At the resumed hearing of the suit on Wednesday, lawyer to the House of Representatives, Kayode Ajulo informed the court that he is yet to be served with the processes as he insists that the service is key and fundamental to fair hearing.

Also, clerks of both the National Assembly and the House of Representatives and the AGF were absent from court and not represented by their lawyers.

The plaintiff’s lawyer, Okoro Nkemakolam, said the respondents had failed to file any processes to show cause why such restraining order should not be issued by the court.

He urged the court to order parties to maintain the status quo to protect the subject matter and prevent a situation of foisting a “fait accompli” on the court.

The judge declined to grant the plaintiff’s request on the grounds that the May 13, 2020 summons for the defendants to appear in court on Tuesday to show cause why they should not be restrained concerning the bill, was predicated on the service of all the respondents with the required court documents.

She then ordered that the Speaker of the House of Reps be served through his lawyer, Ajulo and adjourned till June 1 for further hearing.

Babajide Sanwo-Olu   Lagos state has discharged another 31 COVID-19 patients after successful treatment. The …

Powered by Iszzyblog | Designed by Team
© Copyright 2020, All Rights Reserved